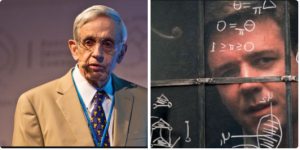 An automobile accident, involving a taxi cab in New Jersey, has claimed the life of Princeton Nobel mathematician Prof John Forbes Nash, Jr, and that of his wife Alicia Nash, police say. (1)

Nash, best known for his contributions to economics and game theory, won the Nobel Prize in Economic sciences in 1994.

Nash was further brought to the public eye via the biopic film “A Beautiful Mind”.

Regarding the tragedy, Russel Crowe Tweeted:

Nash and his wife Alicia were staunch mental health advocates; outspoken on all manner of patient’s rights issues. Both Nash himself, and his son, have spoken openly about having suffered from variant forms of the schizophrenias. (2)

In a 2004 interview, conducted at the 1st Meeting of Laureates in Economic Sciences in Lindau, Germany (3), Nash talked about his illness.

When asked how a man, who had devoted his life to advanced theory of reason, could possibly hold such delusional beliefs, including that aliens were communicating with him; Nash soberly replied:

Both John Nash and his wife Alicia will be dearly missed.

*JJR is the psychiatry and research science investigator for the Chronicle LS.

II) “The Sveriges Riksbank Prize in Economic Sciences in Memory of Alfred Nobel 1994.” Accessed May 24, 2015. http://www.nobelprize.org/nobel_prizes/economic-sciences/laureates/1994/.